The Chimney Effect: A Ventilation Overview

Have you ever heard of the chimney effect? If the phrase “heat rises” rings a bell, you’ve heard of it — even if you weren’t familiar with the name itself. The chimney effect is a basic ventilation concept that involves ushering cool air in, and warm air out, with help from strategically placed openings in a building. At Metallic Products, our team enjoys getting back to basics every once in a while, and educating others about the “why” behind our metal buildings accessories. Read on to learn how the chimney effect goes to work keeping metal buildings (and other structures) cool and comfortable. 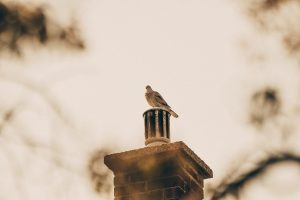 How Does the Chimney Effect Work?
This ventilation concept centers on the idea that warm air, which is less dense, rises, while heavier cool air remains lower to the ground. As the name suggests, you can think of it like a chimney. By incorporating openings such as louvers on lower and upper levels of a metal building, cool air naturally finds its way in through the bottom opening, pushing warm air up and out through the top.

A Ventilation Term by Any Other Name …
While the naming behind the chimney effect makes complete sense, that isn’t the only commonly used term. This concept is also known as the “stack effect,” due to the fact that the different air temperatures and densities basically stack one on top of the other — until that warm air gets released.

How Does the Chimney Effect Differ from the Wind Effect?
While both the chimney effect and wind effect involve using openings in a building to replace warm or stagnant air with cool, the main difference comes from the placement of those openings. The wind effect (also known as cross ventilation) takes a horizontal approach, moving air in one side of a building and out the other. The chimney effect is a more vertical alternative, moving warm air up and out. You can learn more about the wind effect in our blog post “Airflow: 101 — What is Cross Ventilation?”

Our crew doesn’t pretend to be a team of science teachers, but we do enjoy educating people about the reasons products like ours work. If you have questions on any of this, or if you are curious about the best ways to ventilate your metal buildings, we would love to help you out. Feel free to contact us at any time!