on All Flashing
While Supplies Last

8 Songs to Get Things Rockin’ for MetalCon 2021 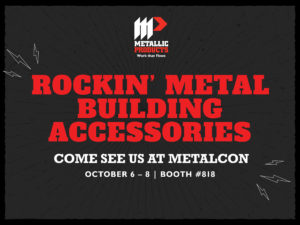 Who else is getting ready to rock at MetalCon 2021 this October? After having to press pause on 2020’s in-person gathering of metal building pros, we’re extra excited to catch up this year in Tampa, Florida. The Metallic Products team has opted for a metal band theme this time around (because why not)? And as we all get pumped up in the days and weeks leading up to things, we decided a playlist was the perfect way to get the party started. Read on, rock on and get ready for MetalCon 2021. (And if you want to catch up in person? You’ll find us at Booth #818 at the event!)

“Metal Health (Bang Your Head)” — Quiet Riot
Is there any song more metal than ‘80s classic “Metal Health”? Get out the fringe and get ready to do a little headbanging, because this song is going to get the conference started right.
Fun Fact: This was the first heavy metal album to top the Billboard charts!

“Metal” — Gary Numan
Taking it back to the late ‘70s, this upbeat New Wave classic been covered several times through the decades. Gary Numan’s “Metal” was a pioneer of the synth-pop sound that’s still around today.

“Metal Gods” — Judas Priest
This B-side to the Judas Priest hit “Breaking the Law” might not be as loud as other tracks, but it’s still a solid song to rock out to. Released in 1980, the group tried to make Metal Gods sound as “metal” as possible by recording the sound of cutlery trays being shaken and dropped. (Who knew?)

“Enter Sandman” — Metallica
Okay, “metal” isn’t in the title, but any metal playlist has to include Metallica’s iconic No. 1 hit. “Enter Sandman” remains one of the top-selling heavy metal songs of all time, and with good reason. Crank it up before you hit the expo floor, then come and say hello!

“Cold Metal” — Iggy Pop
While not one of Iggy Pop’s most well-known hits, “Cold Metal” is one of his most heavy metal influenced songs. It was featured in the 1990 horror film “Hardware,” where Iggy had a voiceover role as a radio DJ.

“Iron Man” — Black Sabbath
Traveling all the way back to 1970, Black Sabbath’s “Iron Man” has one of the most iconic main guitar riffs in rock. A remastered version even played during the end credits of the original Iron Man film, although the song isn’t connected to the comic book hero.

“Iron Maiden” — Iron Maiden
This punk-influenced song will keep everyone rocking between sessions with its catchy chorus and fast beat. Iron Maiden’s self-titled tune was released in 1980 at the height of punk’s popularity and blends both genres seamlessly.

“Metal on Metal” — Anvil
Not as well-known as some of their contemporaries, Anvil was a festival favorite at metal shows in the 1980s. “Metal on Metal” is their take on what it’s like to be in a headbanging crowd during a metal concert. It also features a guitar riff that’s hard to stop humming.

Hopefully these songs get things kicked off on the way to MetalCon. We’ll see you on the expo floor. (Don’t forget — Booth #818!) Stop by and talk metal with us. Yes, both the songs and the products!